The Ponca Tribe of Nebraska has been reintroducing the bison to the native homelands since the Tribe was restored in 1990. With assistance from the Intertribal Bison Cooperative (ITBC), the Ponca Tribe now has a herd of nearly 100 animals in two pastures.

The buffalo that roam the grassy fields west of the Old Ponca Agency appear to be as content as the Ponca ancestors who lie in the Ponca Cemetery overlooking those same grassy fields. The presence of the buffalo brings a calm to the Old Agency and to the people who visit. They remind all Poncas of days long ago when our ancestors sang and danced in the same land.

Each year the Tribe harvests several buffalo from the herd. It donates a buffalo to the Annual Pow Wow to feed all the people who come to share in dance and song. It also donates a buffalo to each of its service areas for celebrations and for distribution to elders and members alike.

The Bison Project began in 1994 when the ITBC, which assists Native Tribes with buffalo restoration on Indian lands, awarded a $30,000 grant to the Tribe. The grant money was used to install a “bison-tight” fence around the 155 acres adjacent to the historic Ponca Community Building and powwow grounds in Niobrara. Two years later, the Tribe released eleven buffalo into these rolling hills and lush meadows that once were the center of the Northern Ponca Reservation.

For its second herd, the Tribe purchased an additional 320 acres. The second property includes a one-acre forest that also supports wild turkeys, deer, and other small game. With the help of another ITBC grant, the tribe enclosed approximately two-thirds of this property for bison grazing. By 2002, the two herds consisted of more than 90 buffalo, with 20-25 new calves born each spring.

Additional grant funds have been used for purchasing holding corrals and a squeeze chute, for transporting buffalo from national park reserves, and for veterinary services, an all-terrain vehicle, tractor, and feed. The Tribe also employs a Bison manager to oversee the repair and maintenance, land management, and overall tending of the two herds.

The Ponca Tribe works with the Natural Resources District to manage its buffalo pastures. The NRD has assisted in maintaining three dams located on the Ponca Agency and the second (McManigal) property.

As was true with most of the Missouri Valley Tribes, the economic base of the Ponca rested upon a combination of hunting, fishing, gathering, and horticulture. Hunting, being the most exciting of these activities, was accorded the highest prestige in Ponca culture.

From the Ponca village sites, the Tribe would go on Wah-ni-sa (buffalo hunt) up the Missouri River as far as the Rocky Mountains. There were two tribal hunts annually, one in the late spring or early summer, the other in the fall. These hunts were sacred to the Ponca because they depended upon the buffalo for the winter supply of dried meat. The Ponca also depended on the bison for clothing, shelter, tools, medicine, spiritual, and religious purposes.

Our goal is to continue working with ITBC and to use the bison for education, cultural, and health purposes. 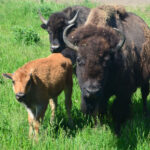